“I want to show that people need not be limited by physical handicaps as long as they are not disabled in spirit.” – Stephen Hawking

Here’s to a soul who defied the norm, dared to think beyond what anyone could imagine and changed the way we think of the world, the universe and anything else we can encompass in our sometime simple mind.

To be honest, I didn’t know of Hawking till a little later in life (yes, perhaps I lived under a rock) but once I did, he immediately became someone I admired.  He enlightened our lives with outer space discoveries, theories, humor and even drama from his early life. I have always been fascinated with the universe physically and more recently, spiritually.  Somewhere along my life I started to look up to him for being such a rebel. A rebel in breaking physical barriers, a true visionary who didn’t let what others think limit what he can imagine or think of the world beyond our own.

I mean look at what he thought of black holes:

“They’re named black holes because they are related to human fears of being destroyed or gobbled up. I don’t have fears of being thrown into them. I understand them. I feel in a sense that I am their master.”

I want to be a master of my fears.

He was a pretty awesome scientist and a human being if you ask me.  Yes he might have been a challenging person to deal with according to people close to him early in his life but no one is perfect and according to Hawking, “Without imperfection, you or I would not exist.”

With this being my first ever article, I’m glad it is on Hawking…even in his parting, he gave me a gift.  Almost always in life, I have realized every single challenge or what may seem as something unfortunate, has always blessed me with a gift of learning.  It has always pushed me to do something beyond what I thought I was capable of and made me stronger than the moment before.

On that note, I encourage anyone reading this to do something challenging every single day and let yourself be amazed of what you are capable of.  As he famously said: “Remember to look up at the stars and not down at your feet”, remember to look beyond what you think you can do… 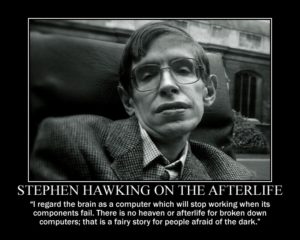 RIP Professor Stephen Hawking, you will be greatly missed and often thought of…

I read an article today in TechCrunch by Jim Fruchterman, founder of Benetech and it was amazing, so I had to write about it, of course. In it, Fruchterman writes about a letter recently written Read more…